Cops are so stupid sometimes.  I wasn’t there of course, but let’s be serious this country is fucked and SHOW OF FORCE isn’t going to do anything. I feel bad for the guys who have the shitty ass job of enforcing “law” on American’s dissatisfied with the course of our democracy.  Yes We The People of the United States are pissed off too bad Mr. Officer.

“Veterans for Peace member Scott Olsen was wounded by a less-lethal round fired by either San Francisco Sheriffs deputies or Palo Alto Police on October 25, 2011 at 14th Street and Broadway in Downtown Oakland” 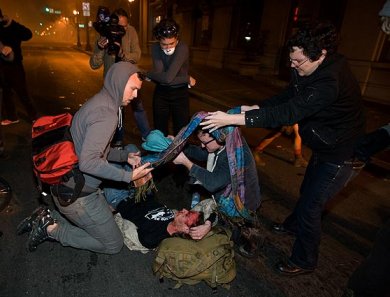 The post Veteran Shot in the Face by Police Projectile at Occupy Oakland Protests appeared first on 8&9 Clothing Co..