Yup! It’s up to you. Our Air Jordan 12 Playoff T Shirt release will be decided by our Facebook, Twitter, Tumblr and Instagram fans/followers. There are 2 versions of the graphic and only one goes to production!  Both inspired by the movie Shottas. Both feature a revolver stashed in the Jordan 12. Choice A is a story line format showing you close up Wayne removing the pistol from the 12. Choice B, incorporates the unique shape of the Jordan 12 upper into the unconventional print. Can’t lose with either one. Both bang but which one goes harder. Choice is yours. Let us know. One goes to production tomorrow! 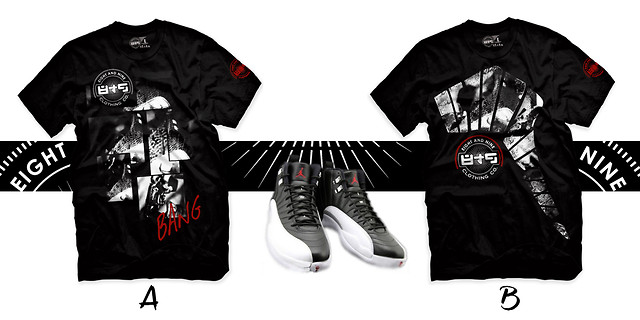 The post Your Chance To Vote: Which Version Of Our Jordan 12 Shottas Tee Should Release? appeared first on 8&9 Clothing Co..