Confetti At Macy’s Parade Made From Police Documents 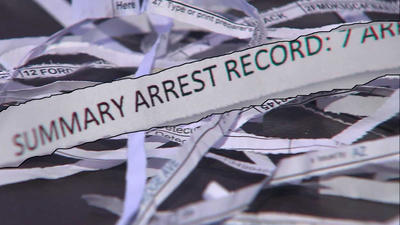 The confetti from this year’s Macy’s Thanksgiving Day Parade just happened to be made from shredded confidential police documents, that were still readable by the public.

According to Gawker, the pieces of paper were courtesy of the Nassau Police Department. Because the documents were sliced horizontally, detailed crime information, and the names and social security numbers of undercover officers, were all readable to the public.

One parade attendee recognized that the confetti was not blank paper when a piece landed on his friend. “It landed on her shoulder and it says ‘SSN’ and it’s written like a social security number, and we’re like, ‘That’s really bizarre,’” said Ethan Finkelstein, a student at Tufts University. “There are phone numbers, addresses, more social security numbers, license plate numbers and then we find all these incident reports from police.”

Nassau County Police learned of the incident, and are investigating how the paperwork ended up in the confetti. “The Nassau County Police Department is very concerned about this situation. We will be conducting an investigation into this matter as well as reviewing our procedures for the disposing of sensitive documents,” said inspector Kenneth Lack.

Held in New York City, the Macy’s Thanksgiving Day Parade is the largest of its kind, and is annually attended by millions. Among those on the bill was Elmo, who put on a brave face in spite of the s-x scandal that led to his puppeteer, Kevin Clash, leaving Sesame Street.

The post Confetti At Macy’s Parade Made From Police Documents appeared first on 8&9 Clothing Co..