The Nike Air Foamposite One has seen some sick graphics and color blocking recently, but the Phoenix Suns colorway continues to draw dominating attention. 8&9 put together a dope design for the Phoenix Suns Foamposite Tshirt. The tribute to Penny Hardaway’s time as a Phoenix Sun has an electro purple colorway with a metallic, almost wet paint like finish. Penny’s 1 cent logo, Nike swish and a line up the nubuck black tongue are all in total orange. The sole pops with clear on black carbon fiber and the black nubuck in the center houses black laces. With orange on black heel tabs and a purple that changes intensity with the light, you’re killin’ fellow sneakerheads who went straight Eggplant Foamposite. 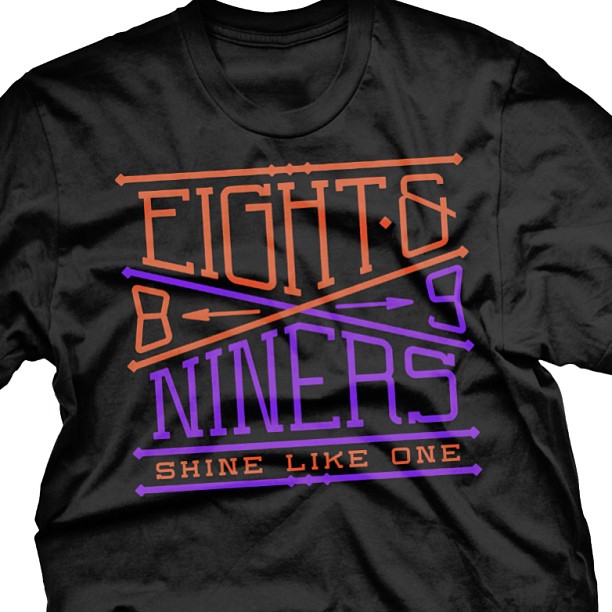 Click the Picture to Cop Your Phoenix Sons Tee – Eight and Niners!

Now it’s time to pair up your Penny throw back colorway with our Phoenix Suns Foamposite t shirt to match that insane purple. Eight & Nine has you covered and doing right by your new babies. This Phoenix Suns Foamposite T Shirt matches the Nike electro purple, black and total orange of the shoe. This T brandishes the “Shine Like One” tag, cuz you’re gonna shine brighter than Steve Nash did during his run as a Sun in your new gear.

Eight and Nine’ers know the power of simplicity, especially when it comes to matching a strong shoe like the Suns Foamposite. Let the shoe do the work, while your shirt just says what everyone is thinking. Method Man’s voice will play soundtrack when people see you and hear “I call my brother Sun cuz he Shine Like One” running back in their heads while they turn to get a look at those bomb Penny’s. Snatch up your shirt and get out there. Grab another for your brother while you’re at it.

“I call my brother son cuz he shine like one.”  #8and9ers Shine Like One. Phoenix Suns colorway. Perfect shirt to match the Nike Air Foamposite Suns. The color on this shirt to match the Phoenix Suns foams and the Nike Air Force 180 Mid.  Simplicity reigns supreme.  What else to say? Brand new tee from your favorite independent streetwear company.