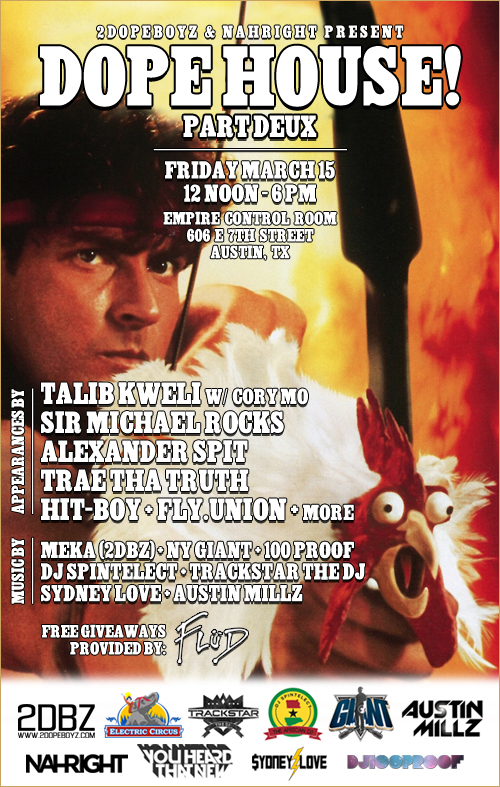 The 2013 edition of the Dopehouse kicks off this  TODAY at 12pm and will once again be a place where you can get hammered and drunkenly sing along to “No Hands” and other (probably ignorant and quite possibly detrimental to society-laden) tunes while some random-ass chick you just met at one of those free showcases earlier in the week grinds feverishly on your pelvis… except this time it will be in the middle of the day, in a much larger (read: much larger) venue and with more special guests, with a couple of performances thrown into the mix to boot. Why throw a party in the middle of the day? Why not?

Keep it real: those that attend SXSW know that by Friday you’re slowly starting to get burned out on constantly fighting in line trying to get into a showcase, only to get in and be flanked by people who look like they haven’t showered in days constantly stepping on your shoes and screaming in your ear, while people who actually haven’t showered in days frenetically wave their arms and funk in the air at the “aspiring” (read: struggle) musician desperately trying to get their attention while simultaneously blocking your view and violating your sense of smell, while that one guy who insists on smoking weed at every concert he attends (you know, because it makes the show “that much better” in his mind) blows the smoke into your hair and face next to that one person that can’t handle their liquor and is about five seconds away from tossing his insides next to your feet that’s been stomped into oblivion by the dirty hippies who are suddenly allergic to water and haven’t showered in days.

(This was my SXSW a few years ago.)

Well, instead of having to deal with that, come fuck with us, get fucked up in the middle of the day, grab a free, limited-edition Rocksmith x 2DBz Dopehouse SXSW tee or a watch from FLüd Watches, party, bullshit and enjoy the rest of your day trying to figure out which way is up.