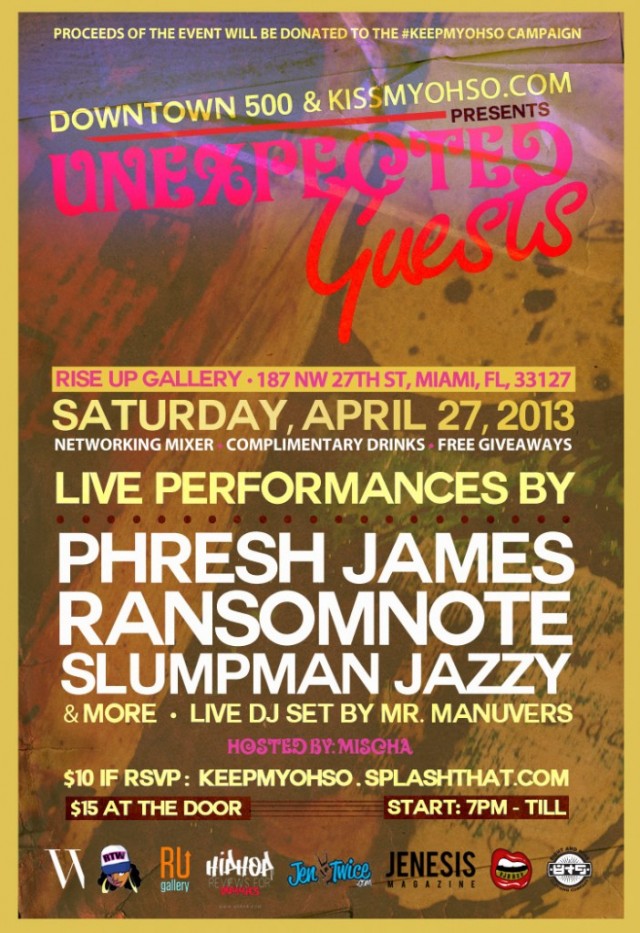 @OhsoXO DOWNTOWN 500 & KISSMYOHSO.COM Present an evening of live talent on Saturday, April 27th at Rise Up Gallery in Wynwood. This event is in honour of DJ OHSO and her recent project “#KEEPMYOHSO”, which began as a kick-starter campaign to raise money to renew her work visa.

Please join us at 7:00p as the night begins with a networking mixer, complimentary cocktails, an outstanding DJ set by Mr. Manuvers, live art by GIOVANNA▽XIII and will lead up to performances by Phresh James, Ransomnote & Slumpman Jazzy. A cypher will also be conducted during the intermission of the event (participants are welcome on a “first-come” basis).

In less than a year, DJ OHSO has established herself in the indie/local music scene and has been a “firm supporter of the #NewMiami movement that has been brewing in South Florida”, says Tones of The305.com. In less than a year, DJ OHSO has already had to overcome some of the obstacles of being a newer DJ, being new to Miami and being a female in a male dominated industry. “This part of my journey [in life] has been crazy…but the good experiences completely outweigh the bad, I’ve met some amazing, supportive people which I am truly grateful” she writes, in her #KEEPMYOHSO blog post.

$10 RSVP is available HERE, which you pay at the door, and it will be $15 with out it. RSVP does NOT guarantee entry and space is VERY limited, so please arrive early.

Proceeds, and any additional donations, will go towards the #KEEPMYOHSO campaign to get OHSO back to Miami. Apparently it is still winter in Toronto, so let’s get her back to Miami as soon as possible!

#KEEPMYOHSO T-Shirts will also be available online & at the event for those interested. ($15)

This event is made possible with contributions from just SOME of the supportive people that OHSO speaks dearly of: Rise Up Gallery, Jenesis Magazine, HHRFD, Ra-Image, Wakeupstar Collective, 8&9 Clothing, JenTwice, all of the performing acts and more!.