After months of waiting on the Air Penny 5 we have finally reached the week of its release. The Air Penny 5 “Highlighter” will be dropping this Saturday on the 7th. The Air Penny 5 made its way back onto Nike’s roster last year and since its re-introduction its been a hit with multiple color-schemes and creations.  The entire sneaker is decked out in highlighter (volt) contrasted by hints of white and black throughout the sneaker. The mid-sole was given a black speckle enhancement accenting the entire design. Take a look at the gallery below for a better look at the Nike Air Penny 5 which will be hitting retailers this Saturday September 7th. 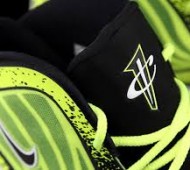