Ice Cream is gearing up to launch special collection which features one of kids favorite cartoon characters Spongebob Squarepants. BBC/Ice Cream founder Pharrell Williams will be at the BBC store in Soho New York to help launch this collection. At first thought it seems weird that they are making a Spongebob inspired collection but BBC’s founder is a big fan of the Sponge and is excited to release this collection on September 10th. This isn’t the first time SpongeBob has gotten a taste of street wear Bape released a collection as well which featured a few shirts shoes and a stuffed Sponge Bob Baby Milo. Take a look at the gallery below for a look at what Bape’s Spongebob collection compare it to the Ice Cream collab once it drops this weekend. Keep it locked here at 8and9.com for updates and recaps on this collection and its launch. 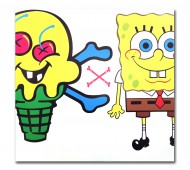