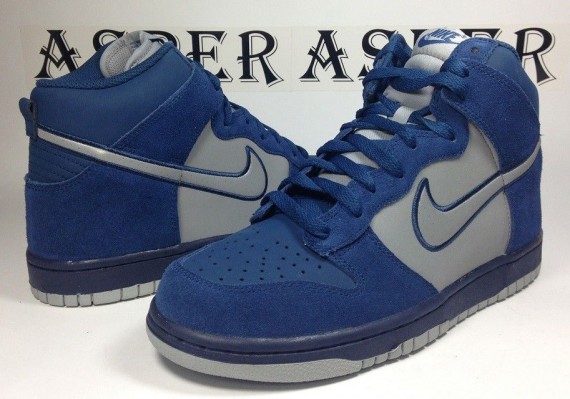 Nike Dunk High – Brave Blue – Reflective Silver- Nike Sb going hard with the colorways as of late.  Dope concept here and a pretty good colorway for the Fall. Check out info and pics after the jump!

Much was made of the Nike Dunk High taking on classic Air Force 1 colorways a short while back. This new pair gives us a twist on a familiar style not from an AF1, but rather, from an SB, as in this very silhouette as issued by Nike Skateboarding. The combination of silver side panel and Swoosh is synonymous with the 2006 ‘Mork & Mindy’ Dunk High SB, but elsewhere, there’s at least one degree of separation that makes the similar layout less obvious. The upper is done in blue suede instead of red leather, the Swooshes are perforated, and a grey outsole is used in lieu of multicolor translucency. Still, the overall impact is similar and these go a step further with 3M reflectivity on the silver parts, so take a closer look at the details below, then pick up a pair from ny_5thavenue on eBay.