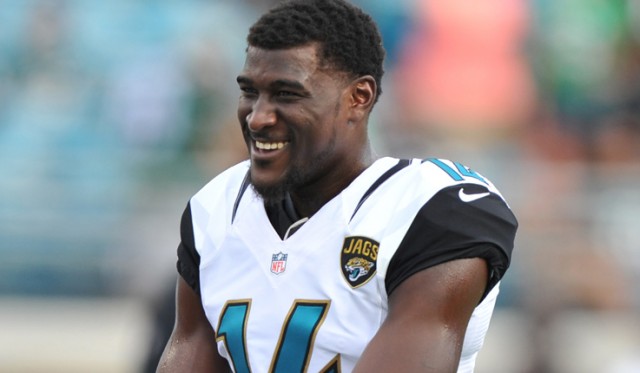 The Jacksonville Jaguars‘ historically poor first half of the season threatens to carry over to November and beyond.

The team announced Friday that wide receiver Justin Blackmon has been suspended indefinitelywithout pay for violating the NFL Policy and Program for Substances of Abuse. He will be eligible for reinstatement prior to the start of the 2014 season.

“His suspension will provide him the opportunity to receive the attention and professional treatment necessary to overcome his challenges, and we will support him during this time. The Jacksonville Jaguarswill evaluate Justin’s status once he has successfully met the criteria to be considered for reinstatement to the league.””All of us who are a part of the Jaguars family care very deeply about Justin and his well-being,” general manager David Caldwell said in a statement. “That said, he must be held accountable and accept the consequences announced today by the NFL.

Blackmon also released a statement, obtained by NFL Media, in which he apologized.

“I want to sincerely apologize to Mr. Khan, my teammates, my coaches and to the Jaguars fans for not utilizing the resources that I was provided to overcome my challenges,” Blackmon said.

He added: “I will address these matters with the type of intensity I usually direct toward my on-field play so that I can be ready to be a productive member of the team and community next season.”

Blackmon already missed the first four games of this season for violating the substance-abuse policy. While in college, he was charged with DUI, but it later was reduced to underage alcohol possession, according to The Associated Press. And he was charged with aggravated DUI just prior to training camp in 2012.

Coach Gus Bradley has publicly and privately expressed his faith in Blackmon’s character.

Although Blackmon’s unique contract stipulates that the Jaguars can release him without owing another dime, there’s no reason to believe he won’t get another chance.

NFL Media’s Albert Breer reported the Jags still might stick with Blackmon and plan to keep working with him. The Jaguars had gotten Blackmon help, and felt like the receiver had made very good progress over the last six months, Breer reported.

So Jaguars fans still might see Blackmon return next season as long as he cooperates with league-mandated protocol, such as attending meetings and staying clean of alcohol and drugs. via NFL