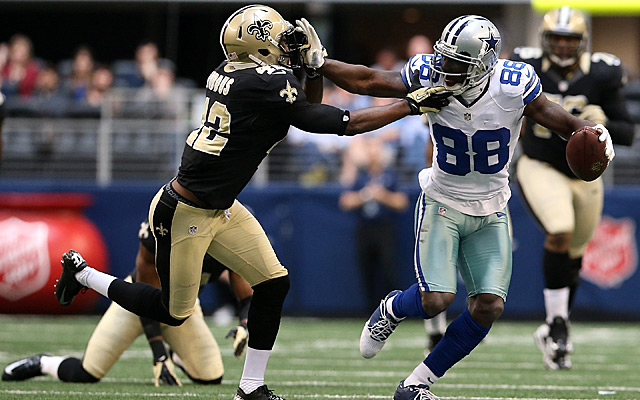 You could have written the story of the Dallas Cowboys‘ season — or, really, their recent history — from just a brief glimpse at Tony Romo on Sunday night. Right before halftime against the New Orleans Saints, when anavalanche of points already had begun to engulf the Cowboys, when linebacker Sean Lee already was off the field and defensive end DeMarcus Ware was limping again, there sat Romo.

With the eventual 49-17 defeat to New Orleans, Dallas has lost to all three opponents who currently lead their divisions — theChiefs, Lions and Saints — as well as to the Broncos.As he blankly stared at the Superdome floor, just after theCowboys‘ defense had ceded another touchdown, you could imagine the quarterback doing the mental calculus for how such a fundamentally flawed team, puffed up by expectation and a comically middling division, possibly could stay with the best in the NFL. And as with calculus, it’s hard to find an answer.

Romo, in that shell-shocked state, almost certainly was thinking only in terms of that moment, so he had enough to worry about. But this is the Cowboys writ large, too.

Year after year, Dallas creates the illusion of contending, only to have its disguise ripped away to reveal mediocrity. This is a team that sports plenty of expensive talent, but proves simply incapable, over and over again, of fulfilling its potential.

The Cowboys are 5-5 and tied with the Eagles atop the NFC East, although Dallas already has defeated Philadelphia once. When most of the nation was last paying attention, Romo was throwing an interception into triple-coverage with two minutes remaining against the Broncos. He was excoriated by many but supported by some, including, most significantly, Cowboys owner Jerry Jones, who not only called that 51-48 defeata moral victory but also gave a pass to defensive coordinator Monte Kiffin.

That game was at least competitive. But the Cowboys and Kiffin no longer have that safety net to cushion their fall. Late on Sunday night, after the Saints had racked up an astonishing 40 first downs (for comparison’s sake, consider that Dallas ran 43 plays total) and the Cowboys‘ defense had yielded more than 600 yards for the second time in three weeks, Jones admitted that perhaps his decision to fire Rob Ryan (whose Saints defense held the Cowboys to just 193 yards, even though Dallas was in catch-up mode for a full half) and replace his scheme with Kiffin’s simpler defense was not panning out quite as he had imagined.

“We thought it was best for us to go in the direction that we are, and it doesn’t look good right now,” Jones said. “Hopefully, we can make it look good, but I have all the feelings that you have when you want to look back at a decision, and I realize when some of them work, you have to have a few things go along with it.”

Jones went on to say that injuries to the defense bedeviled Ryan, just as they now are doing to Kiffin — and that certainly is true. As soon as Lee left the field with a hamstring injury — one that is now expected to sideline the star linebacker for three to four weeks — Drew Brees began carving up the area between the hash marks. And he had plenty of time to do it, with Ware clearly compromised by his quadriceps.

But the defense did not become the worst — both on the stats sheet and according to the eyeball test — in one game, and injuries cannot excuse all of the Cowboys‘ issues, considering that every team grapples with injuries at this stage of the season. In fact, this unit has been on a downward trend that began on opening night, when Dallas yielded 478 yards to a New York Giants offense that barely has gotten within 100 yards of that total since.

The first part of Jones’ quote above says everything about the Cowboys. So much of what they do looks good for a little while, as if some of the sparkle finally might be restored to that star, only to be tarnished a few months later. While we shouldn’t pretend there wasn’t a loud chorus calling for Ryan’s head last year, this defensive disaster is on Jones’ hands. He also took play-calling duties away from coach Jason Garrett, and while that, by all accounts, was the right thing to do, the Cowboys still haven’t figured out a way to routinely get the ball to Dez Bryant, who was targeted just twice Sunday night, or give Romo any kind of running game as support.

The names might change, the schemes might be simplified and the personnel might shuffle in an out, but the issues remain — and the one constant, perched in the owner’s box, is the biggest of all.

This isn’t a new story, of course, just a particularly maddening one. The Cowboys are stuck in neutral, sometimes appearing to move ahead, only to slip back down the hill, never making any progress. Jones, for all of his business acumen, has not figured out how to tow Dallas to higher ground.

It was easy to mock the late Al Davis for the iron grip he had on the Oakland Raiders — what with the white track suits and Brylcreemed hair — but Jones, for all of his business brilliance, has shown the same inability to look in the mirror and recognize which change is most required.

What made Sunday’s loss to the Saints so galling is that it came on a day when the NFC hierarchy was thrown into the blender for a spin. The Carolina Panthers are surging; the San Francisco 49ers are falling; the Green Bay Packers are collapsing; the Saints had been shaking; the Eagles and Giants are somehow rising. The Cowboys, were they less fragile, would have been perfectly situated to take advantage of a weak division and solidify a top spot in the playoffs.

Every NFL team suffers the occasional confounding defeat — check in with the Indianapolis Colts this week for confirmation — but the way the Cowboys fell to the Saints is plainly explainable, along with the decisions that have led to a startling lack of depth and the absence of creativity among coaches. Jones, in his role as general manager, formed this roster, manages this salary cap, hired these coaches. He is charming and engaging, and he deserves credit for admitting he might have goofed this time around. But that doesn’t mean he won’t goof again.

So maybe Jones will fire Kiffin at season’s end or before and hire another coordinator; maybe the next draft he leads won’t include so many disappointments. But as the Cowboys trudged out of New Orleans — leaving Ryan to buy a round for fans at a bar afterward — they could have had a Bill Parcells admonition ringing in their ears.

“You are what your record says you are,” Parcells used to say.

The record says the Cowboys are nothing special. And Jones’ record, glittering early on with those three Super Bowl titles, now is like a star that is dying somewhere out in the galaxy, growing dimmer with each passing year. via NFL