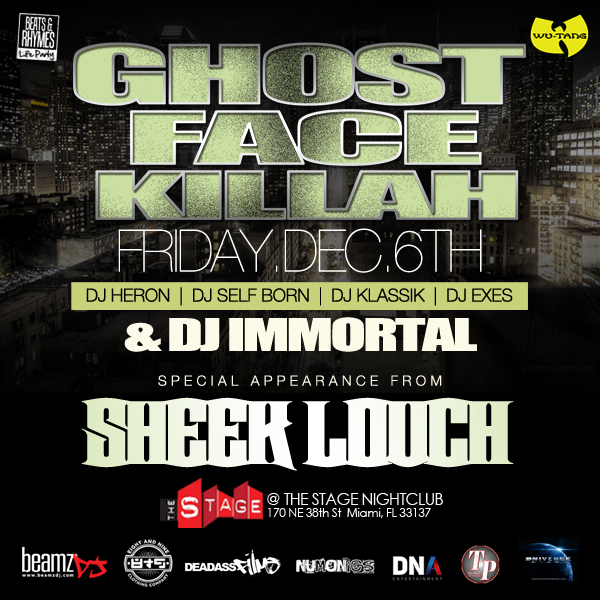 Art Basel week is the time of the year when the vanguard of the art world converges on Miami Beach. This year, The Stage Miami will be presenting a gallery of the best of old school hip-hop and new urban sounds during the height of Art Basel, featuring De La Soul on Thursday, December 5, the Wu-Tang Clan’s Ghostface Killah on December 6 during Beats & Rhymes Fridays and Black Violin on Saturday, December 7, among others.

Beats & Rhymes Fridays features the weekly spin work of DJs Heron and Self Born plus special guest DJs and performing artists, all revolving around hip hop and the best boom bap. The December 6 edition will feature the two resident DJs along with DJs Exes and Klassik. Staten Island, NY’s Ghostface Killah, who released the critically-acclaimed horror / hop concept album Twelve Reasons to Die in 2013 (a collaboration with film producerAdrian Younge), will headline the evening’s affairs. The album climbed as high as 6 on the Top Rap and Independent Album charts, 7 on the Billboard R&B chart and 27 on the Billboard 200. Presale tickets are $33 and available online