The Original Air Jordan 1 (I) Black Red released in 1985 and was quickly nicknamed Banned because David Stern said the colorway did not match league regulations.  This may be the sneaker and Michael Jordan may be the man who saved Nike from extinction. Every time Michael Jordan wore the Original Air Jordan 1 (I) Black / Red he was fined $5,000, and Nike would pay the debt.  The commercial to follow set off a frenzy which has prices on this sneaker upward of $2,000 own yours in this limited print tribute to the Jordan 1’s.  Now you can pay tribute to the sneaker that started it all with this exclusive Jordan 1 poster 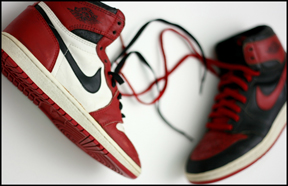