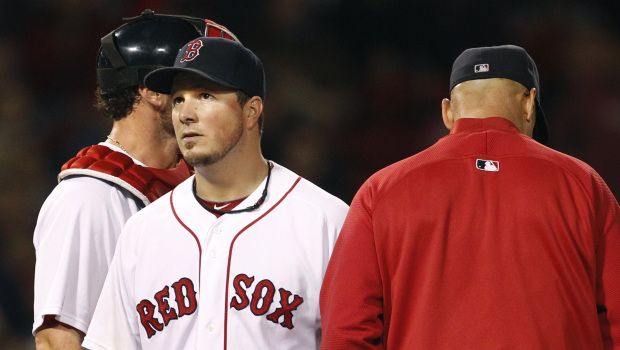 via Big League Stew Hours before he was set to start a game against the Baltimore Orioles, Boston pitcher Erik Bedard(notes) was served papers at Fenway Park as part of an ongoing child support dispute with an ex-girlfriend.

What made a routine legal process of the Massachusetts Probate and Family Court noteworthy and weird, however, was the man delivering the documents. Not only did lifelong fan Tom Cabral proudly wear a Yankees shirt for his meeting with Bedard, he also bragged on his public Facebook wall that his timing was intentional as Bedard would be pitching later that day in a key game for the AL wild-card chase.

Honestly, you couldn’t even make this stuff up for the pages of The Onion.

“The Red Sox were very cooperative,” Cabral told The Post. “They asked me if I could serve these tomorrow because he was starting tonight. My position was, my client [Bedard’s ex-girlfriend Courtney Roberts] wants it served today, and that’s what I have to do.” […]

“When I walked in I was like, I’m a Yankees fan, but I’m not trying to (give you a hard time),” Cabral [right, looking an awful lot like Louis CK] said. “I told him that and said, sorry, I’ve got to do this. But he said it was no problem. I handed him the copies of all the documents and he signed them.

“(The Red Sox) legal department was joking with me about it … they were saying, ‘That’s why you’re so adamant about doing it today … you’re a Yankees fan.'” via NY Post