Russell Simmons is currently in Boston taking part in the Occupy Boston movement. After this morning’s raid on Zuccotti Park, the birthplace of the Occupy movement, wherein over 100 protesters were arrested, Russell has decided to call an emergency press conference. During this afternoon’s press conference, Russell is presenting a Constitutional amendment written for a true democracy by a leading Senior Congressman, which bars all but public financing for Federal candidates running for public office. 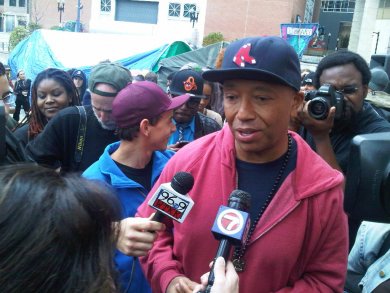 The amendment goes as follows: Section 1. All elections for President and members of the United States House of Representatives and the United States Senate shall be publicly financed. No political contributions shall be permitted to any federal candidate, from any other source, including the candidate. No political expenditures shall be permitted in support of any federal candidate, or in opposition to any federal candidate, from any other source, including the candidate. Nothing in this Section shall be construed to abridge the freedom of the press. Section 2. The Congress shall, by statute, provide limitations on the amounts and timing of the expenditures of such public funds and provide criminal penalties for any violation of this section. Section 3. The Congress shall have the power to enforce this article by appropriate legislation. Section 4. This article shall be inoperative unless it is ratified as an amendment to the Constitution by conventions in the several States, as provided in the Constitution.

This is the time when the system fights back against your right to peacefully assemble around the cause of transparent democracy, to make your voices heard. Read more: http://globalgrind.com/news/russell-simmons-announcement-occupy-wall-street-amendment-details-photos#ixzz1doGXKlSc