HERE COMES THE NEIGHBORHOOD is a short-form Docuseries exploring the power of Public Art and innovation to uplift and revitalize urban communities. The Pilot Season revolves around the Arts District of Wynwood Miami, featuring an array of internationally acclaimed and locally respected Street Artists, Graffiti Writers and Muralists. 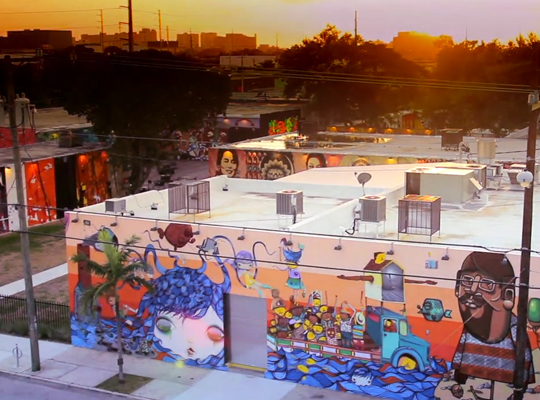 In 2009, Urban Visionary and Placemaker Tony Goldman partnered with Jeffrey Deitch (Deitch Projects Soho and now director of MoCa Los Angeles) to create the Wynwood Walls. What began with a series of parking lots, loading docks, and drab rundown factory buildings, became a curation of high caliber murals from Futura, Shepard Fairey, OS Gemeos, Kenny Scharf and others in its first year. The Walls opened for Art Basel 2009, and now two years later the collection has expanded to include over thirty artists from around the world, becoming a “Town Center” in a district that has grown into one of the largest concentrations of commissioned public art murals in the World.

HERE COMES THE NEIGHBORHOOD explores a unique juncture in history as a new community emerges and evolves. A progressive urban revitalization campaign is examined in the first person, using this year’s new Artists and their commissions as a lens to explore a neighborhood in transition. The Series is framed by colorful overview and concluding episodes, providing the scope of past, present and future. Each episode is accented by images from legendary Documentary Photographer Martha Cooper, who has been capturing The Walls since they began in 2009. Her Photographs will also appear in a Special Edition Art Book “The Wynwood Walls and Doors” set to be released this year at Art Basel 2011.

For more information on the artists and history of the Wynwood Walls visit thewynwoodwalls.com

Episodes of HERE COMES THE NEIGHBORHOOD will digitally premiere for free in the weeks leading up to Art Basel. You are invited and encouraged to share, blog, “like” tweet and tumble this content freely and enthusiastically. Your interest and support is deeply appreciated. To learn more and to view the episodes as they are released, please visit the official site HCTN.tv and the VIMEO PAGE, or contact us directly atINFO@hctn.tv