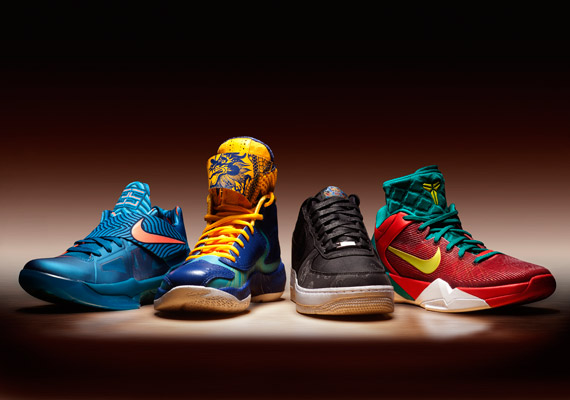 “Dragon, the totem worshiped in China for its command of natural forces, the claimed forefather of Chinese people, will have its likeness on a new Nike collection. By launching the specially designed shoes to celebrate the coming Year of the Dragon, Nike reveals a new dimension of creative expression.

In what has become an annual tradition, Nike draws inspiration from the Chinese zodiac for the 11th year in a row. The impeccable attention for detail portrayed in this collection is the best yet. Four models – AIR FORCE 1 LOW SUPREME, AIR JORDAN 2012, NIKE KOBE VII SYSTEM SUPREME and NIKE ZOOM KD IV, were reworked to capture their association with the mythical creature. The collection of shoes represent the pinnacle of performance footwear, celebrating the past and present, with elite franchise styles. Nike designers aligned Chinese culture to cosmopolitan aesthetics and added a touch of novelty to the nobility and greatness of the dragon. The number of four echoes a Chinese idiom that dragons rise out of FOUR seas, conveying best wishes for the Chinese new year.

AIR FORCE 1 is irreplaceable for Nike and the fans. Inspired by dragon robe, the design team renewed its glory with AIR FORCE 1 LOW SUPREME. The cloud-and-dragon pattern on the tongue, plus dragon design on the black silk texture of the sides and upper, evokes memories of royalty in China. The cloud-and-bat pattern on the sole is another derivative from dragon robe, which in Chinese culture implies good fortune. The appeal consummates with the Chinese character ‘Long’ (dragon) on the counter, the suede panel on the midsole, and the wax-finished shoelaces.

Chinese believe that dragon is a holy being, way above the mundane world. In the arena of basketball, Michael Jordan may be the only equivalent to that transcendence. As the largest single-digit number, 9 is appreciated as a sign of utmost power and achievements. Only emperors can wear robes with 9 dragons. A 9-dragon wall was exclusive for the royal family. 9 is also the lucky number for Michael Jordan. In his 9th season between 1992 and 93, Michael set personal and association record. Inspired by this mystical connection, the Jordan Brand design team, retouched AIR JORDAN 2012 for the new collection. The theme color of blue, in contrast with the yellow inner lining, underpins the message of supremacy, accentuated by the dragon pattern around JORDAN Logo on the tongue. The effect reaches its apex in the limited edition packaging, where red background is decorated with golden dragon and JORDAN Logo, bursting with Chinese features. Two cushions and three midsoles are available, offering functional and aesthetic benefits.

Kobe Bryant appreciates Chinese culture, in particular Chinese Kung Fu. The quest for agility and speed has been integrated into his own athletic art. Drawing inspiration from Kobe’s Italian root and Kung Fu movies filmed in that country, the design team rendered NIKE KOBE VII SYSTEM SUPREME with the signature tri-color of Italy. NIKE KOBE VII SYSTEM SUPREME comes with a cushion printed with Kobe’s exclusive golden Logo, a statement of invincibility. The matrix design on the upper is a special code, spelling the message for Kobe. With his signature and an animated dragon pattern on the counter, this design is impeccable for the Chinese new year.

Kevin Durant was born in a year of the dragon, and he does demonstrate dragon-like power in the court. As 2012 is the year of water dragon, the Nike Basketball design team incorporates an array of watery elements into NIKE ZOOM KD IV. The signature strap, in combination with the wave pattern on the tongue and the laser-etched blue shadows, creates a rippling effect. The water dragon surrounding the KD logo on the counter highlights oriental association. The whole piece is dominated by light blue and light mango, symbolic of Thunder. NIKE ZOOM KD IV adopts new Adaptive Fit system to deliver the perfect fit.

In addition to the four footwear styles, the Nike DESTROYER JACKET will hit the street at the same time. Also inspired by dragon robe, it features woolen texture with black suede sleeves. The dragon theme is illustrated through the lining, plus dragon claws embroidered both in the lining and the back, set alive by the cloud-and-bat design. The DESTROYER JACKET will be available alone or along with the Nike AIR FORCE 1 LOW SUPREME, both in the limited edition packaging.” Via SN 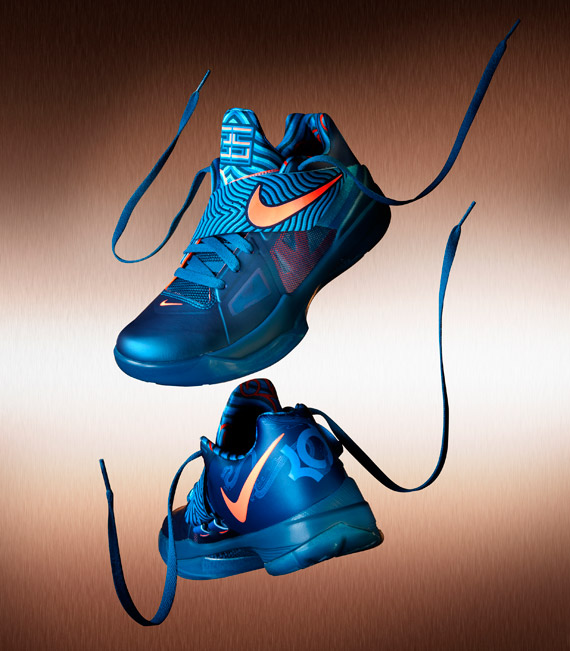 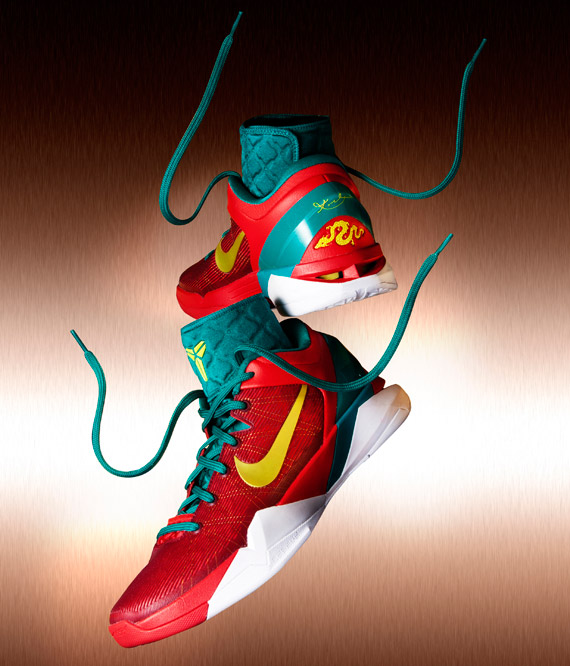 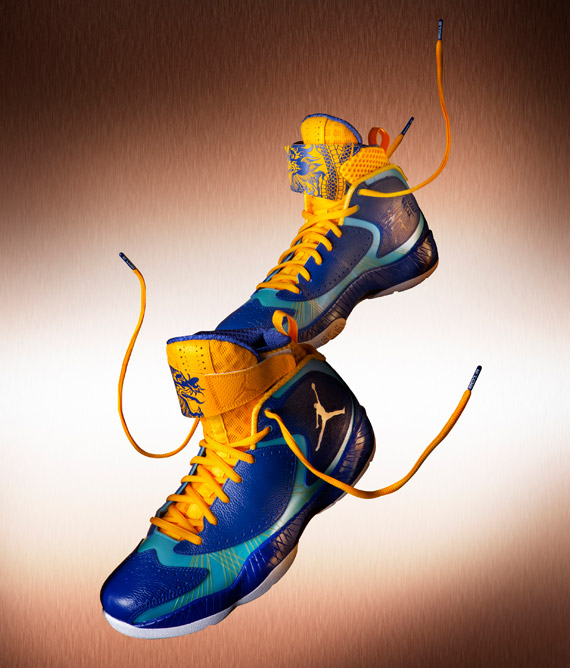 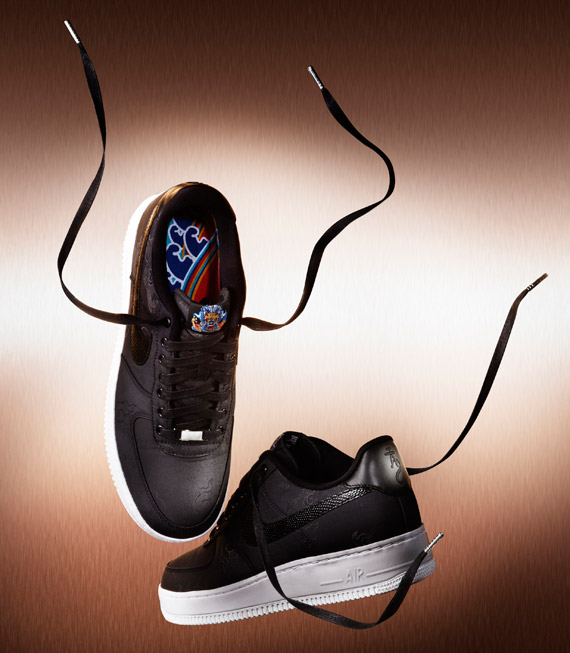 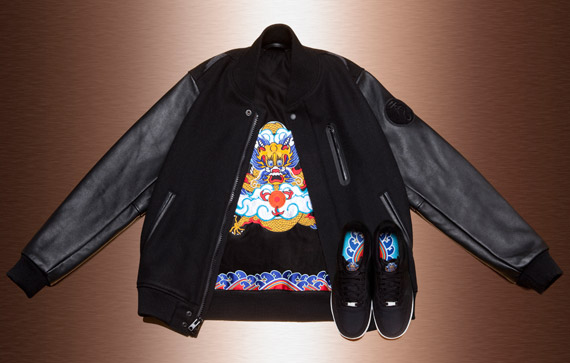 The post Nike Year of the Dragon’ Collection appeared first on 8&9 Clothing Co..