As the Patriots’ offensive line protected Tom Brady from New York defenders on the field at Lucas Oil Stadium on Sunday, high above them sat the real protection.

Four pictures have surfaced of a sniper’s nest perched at the top of the stadium, showing the true level of security on hand for Super Bowl XLVI. As with any other high-profile event, the local police force was apparently ready to roll.

According to a report from Deadspin, the photos were taken recently. Despite no known origins, the field designs and the large “XLVI” on the side of the stadium indicate that they were taken sometime around the game.

Unfortunately, these pictures are hardly comforting. It makes sense to have that sort of protection on hand, but that is one terrifying piece of weaponry. Given how serious this gun is, it’s not really all that encouraging to know the man operating the deadly weapon thought it might be cool to take a couple of snapshots. Something about that attitude just screams “misfire.”

Thankfully, nothing to that effect happened on Sunday. The only misfires happened with the Patriots’ offense. But I would still ask that the next sniper watching over a major event have the courtesy to take it as seriously as possible. We don’t need any pictures of your nosebleed seats at the game 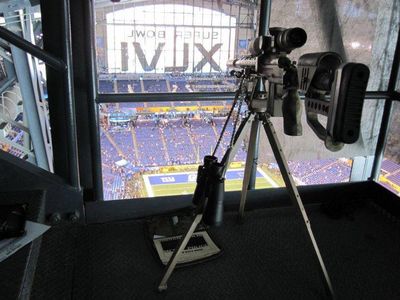 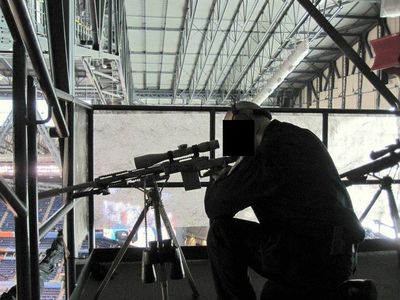