“Today, the Jordan Son of Mars will get the Bordeaux treatment. A popular Jordan colorway featuring the maroon Bordeaux that the release is named after, this Son of Mars released is officially dark grey/university gold–bordeaux–cool mint. The upper of this Son of Mars is different shades of grey with the heel much darker than the toe. Color accents all around the shoe is what really makes this release special. A university gold Jumpman on the tongue is among the most distinguishable from all the Son of Mars so far. Bordeaux is featured on the laces and an icy outsole is bordered by bordeaux touches on the toe and cool mint at the midfoot. The Son of Mars combines elements from five different retro releases – Jordan 3, 4, 5, 6, and XX. Can you figure out the contributions from each?

The Jordan Son of Mars Bordeaux drops today, September 15, at Foot Locker, House of Hoops by Foot Locker, and online at Footlocker.com. It retails for $160.”
via Footlocker 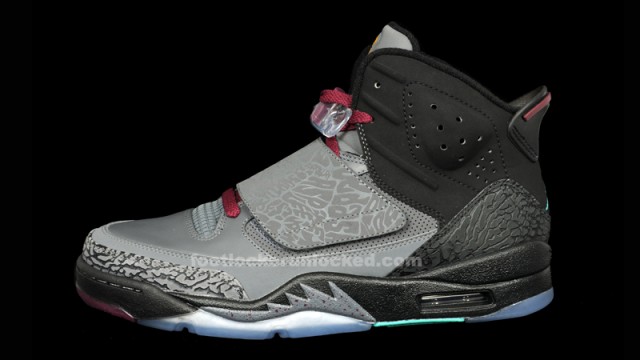