Developer Norman Canter, who once tried to build an indoor ski slope and winter-themed entertainment complex in North Miami is now pitching something similar between the BankAtlantic Center (now called the BB&T Center), and Sawgrass Mills Mall, in Sunrise. Called Pelion Sunrise, it would have indoor ski slopes at least 2,700 feet long and kept at 31 degrees fahrenheit, moguls, ski lifts, snowboarding, sledding, and ice skating, as well as lots of non-snow-related entertainment activities, like electric race cars, paintball, laser tag, the largest indoor skate park in the US, and other activities, plus a conference hotel with 275 rooms. According to the Sun Sentinel, it will be the largest winter sports complex in the world.

Although there are no indoor ski slopes yet in the US, there are roughly 60 already around the world, so they’re nothing new. It’ll presumably be located next door to a casino that the Panthers are trying to build with a company called Boyd Gaming in the same gap between Sawgrass Mills and the stadium. If all goes as planned, the combination of stadium, ski slope, casino, mall, and everything else, sounds like a hell of a massive entertainment smorgasbord. 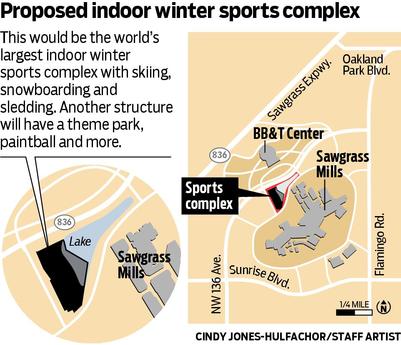