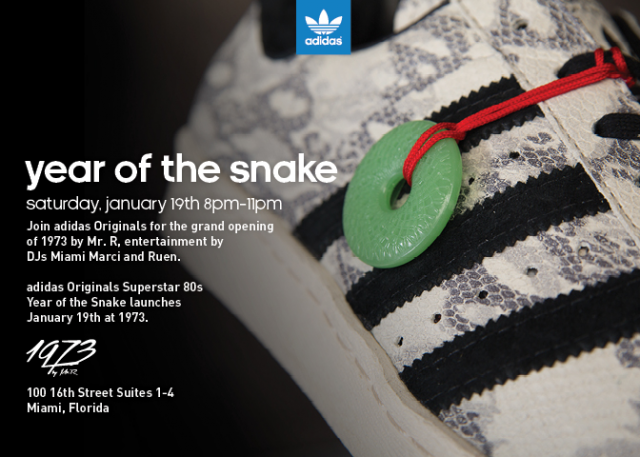 @SneakerBoxClyde It’s finally time. It’s official. 40 years later Mr. R Sports takes a step in a new direction. Together; Mr. R Sports & I proudly bring you 1973; a 2800 sq ft retail space that will focus on the art of storytelling.
To celebrate our Grand Opening, we’ve teamed up with our friends at adidas Originals for an event that’s sure to set the New Year off right. I won’t give too much away.

Theme: Chinese New Year/Year of the Snake. We will be launching the 2013 CNY/Year of the Snake adidas Originals Superstar 80s that night. Free Year of the Snake MCMLXXIII Tee with every shoe purchase.
In addition to both the Red & White Chines New Year ‘YOTS’ Superstar 80s, we will also have the YOTS/CNY the adidas TMAC1 & adidas Crazy Light 2. The first 73 people there will receive a 1973 VIP Card (10% off all apparel & accessories) FOR LIFE!

Surprises: One lucky attendee will win both the Red & White CNY/YOTS Superstar 80s & Tee in their size.