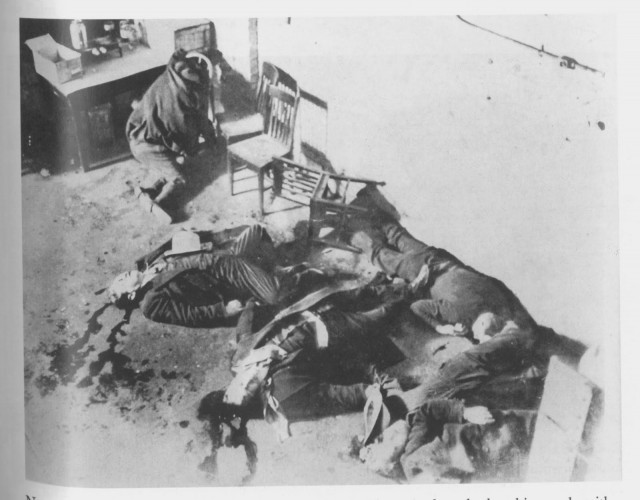 On February 14, 1929, St. Valentine’s Day, five members of the North Side Gang, plus gang collaborators Reinhardt H. Schwimmer and John May, were lined up against the rear inside wall of the garage at 2122 North Clark Street, in the Lincoln Park neighborhood of Chicago’s North Side, and executed. Two of the shooters were dressed as uniformed police officers, while the others wore suits, ties, overcoats and hats, according to witnesses who saw the “police” leading the other men at gunpoint out of the garage after the shooting.

George Moran was the boss of the long-established North Side Gang, formerly headed by Dion O’Banion, who was murdered by four gunmen five years earlier in his flower shop on North State Street. Everyone who had taken command of the North Siders since O’Banion’s rule had been murdered, supposedly by various members or associates of the Capone organization. This massacre was allegedly planned by the Capone mob in retaliation for an unsuccessful attempt by Frank Gusenberg and his brother Peter to murder Jack McGurn earlier in the year and for the North Side Gang’s complicity in the murders of Pasqualino “Patsy” Lolordo and Antonio “The Scourge” Lombardo – both had been presidents of the Unione Siciliane, the local Mafia, and close associates of Capone. Bugs Moran’s muscling in on a Capone-run dog track in the Chicago suburbs, his takeover of several Capone-owned saloons that he insisted were in his territory, and the general rivalry between Moran and Capone for complete control of the lucrative Chicago bootlegging business were probable contributing factors to this incident.