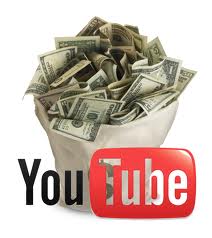 The next time your puppy chases your child’s pet frog, your baby has a funny look on their face, or you witness an unidentified flying object, you may be an upload away from YouTube fame and fortune.

“Thousands of people are cashing in on youtube“, reveals the Head of YouTube’s Partner Program, Bing Chen. Today, like never before, makeup enthusiasts, Pilates instructors, music DJ’s, and people from just about every walk of life are making money off of each viewing of their YouTube video.

What is so astonishing is that 99% of the most successful individuals on YouTube are the average everyday people who happened to have a bit of nerve, good timing, and talent thrown in for good measure.

Sell your own Products

The channel for fitness, Blogilates, and Pilates teacher Cassey Ho has 16 million views along with an e-commerce feature where she sells her own Pilate exercise clothing line and gym bags.

Cassey Ho says she makes a six-figure income now, all thanks to the #1 video sharing platform, “YouTube”.

Michelle Phan is a 25 year old who creates makeup tutorials and teaches women how to purchase cosmetics. Miss Phan’s vivacious persona and sharp tutorials made her an instant sensation with over 3 million subscribers and more than 647 million video views.

Michelle Phan has been asked by Lancôme to become their authorized video makeup artist. She is just one of many that have made some serious cash from creating a successful tutorial youtube channel.

Brother’s Benny and Raffi Fine made their You Tube “Kids React” series profitable. With over 360 million views, it is easy to see why. The videos show teens and children responding to pop-culture and other viral videos.

They have had so much success they can now afford to hire a team of ten employees to work with them.

An easier, faster and probably the most effective method of making money on YouTube is by promoting affiliate products and then linking them in your description field. To get guaranteed sales through this method, all you need is to show how the product is used to get results. This way you will be able to make a lot of sales.

South Korean sensation Psy showcased his song “Gangnam Style” on YouTube and the rest is history. Not only has he clocked up more than 7 million likes and over 1 and a half billion views, Justin Bieber’s manager has added Psy to his roster, his single reached pole-position in the iTunes charts in at least nine countries, and he’s now a multi-millionaire just from google ads on his YouTube video!

Teen artist, Rebecca Black also cashed in on her millions when her single “Friday” went viral on YouTube. She can thank TV host Jimmy Fallon after he shared her “Friday” video clip on late night TV across America resulting in a domino effect of stardom.

Let your voice be heard!

Ted Williams was homeless and down on his luck until a fortunate encounter with a videographer from the Columbus Dispatch. Ted’s speaking voice was so mesmerizing, his YouTube video went viral. After more than 20 million YouTube views Ted has been on countless TV shows and offered voiceover work from well-known companies for TV commercials and radio.

So, if you have a voice with an interesting quality, tone, or twist to it, let it be heard!