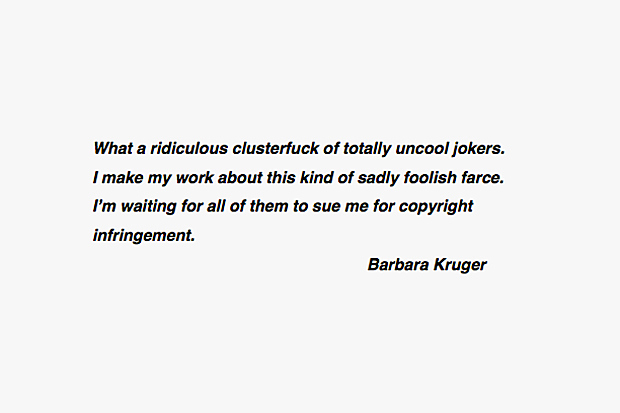 In the case that you missed this news: Supreme is supposedly suing Leah McSweeney and her streetwear brand Married To The Mob for $10 million USD. According to New York Magazine, Supreme – or, more specifically, its founder James Jebbia – claims that one of McSweeney’s founding designs infringes on the brand’s trademark rights. The design in question is McSweeney’s “Supreme Bitch” T-shirt, which since its introduction in 2004 has become a hallmark in Married To The Mob’s canon of successful designs. This situation is rife with irony, as Supreme has been known to produce many of its own ‘referential’ pieces. Perhaps the greatest standing example of this lies in the brand’s logo – the Futura-font-on-red as inspired by the work of iconic artist Barbara Kruger.

In light of these events, Kruger, who has generally kept mum when approached about parties that have taken clear inspiration from her work (both McSweeney and Jebbia included) emailed Complex with her insights on the situation. In this instance, Kruger has spoken volumes in a four-line response, which is featured above. Though brief, the 68 year-old raises a good point about ‘originality’ in art, and at this point one can’t help but reminisce on times in a classroom when a teacher would put not one, but both offending parties in time out. Feel free to express your opinion on the developments, including Kruger’s input, below. via HypeBeast

The post Barbara Kruger Weighs in on the Supreme Lawsuit Against Married To The Mob appeared first on 8&9 Clothing Co..