“ Iman Shumpert, #21 for the New York Knicks modeled for his new mask last week. We shot at the legendary Venice Beach courts while he was in LA for a visit. Shumpert sacrificed a pair of Adidas Top Ten 2000 from the ‘Bright Lights – Big City’ pack. A unique shoe which resulted in a truly unique character. The sole on the Top Ten 2000s is unlike other soles I’ve worked with and I was forced to find new ways to incorporate them into the mask.

As you know new masks are released every 1st & 15th here on freehandprofit.com, but what if you could see more behind the scenes footage, how-tos so you could make your own sneaker masks and even enter into raffles to win 1 of a kind masks from Freehand Profit? I’m happy to announce that I’ll be putting together a KickStarter to develop a Freehand Profit app that would bring you behind the masks. Til then be sure to check out the gallery below to see more photos of the Top Ten 2000 mask. “ 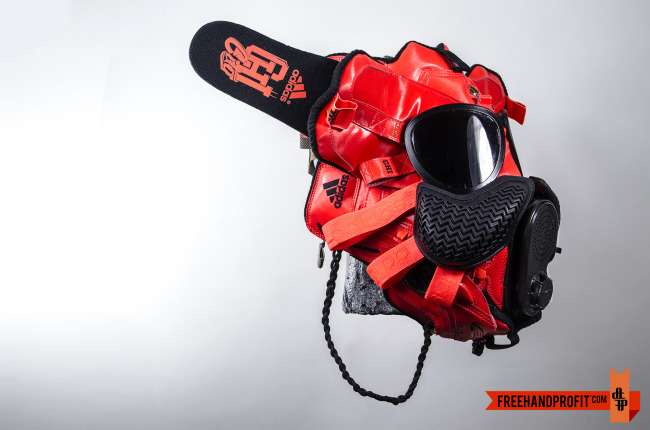