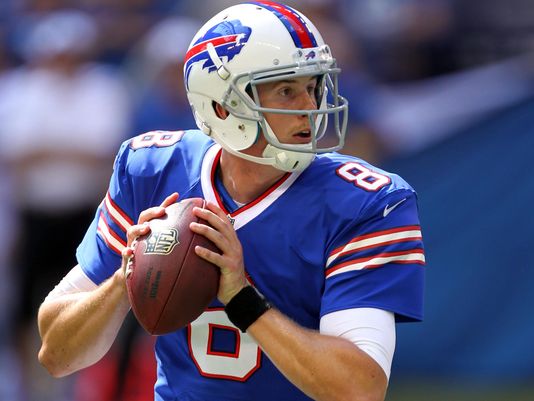 It isn’t easy being a Buffalo Bills fan and, today, we found out that it may have gotten even harder. After quarterback Matt Leinart threw two interceptions and completed just three passes in the Bills’ game against the Detroit Lions yesterday, he was cut today, leaving just one healthy quarterback remaining on the roster, the undrafted rookie, Jeff Tuel. Which makes him the opening day starter for Buffalo. Yikes.

Tuel will become the first undrafted rookie quarterback to start a team’s season opener since 1967. Since the modern NFL was formed, it has never happened. And worse yet, Tuel will be going up against the New England Patriots and their quarterback Tom Brady. Probably safe to say that we can just chalk this one up as an L for Buffalo, right?

Granted, Tuel has performed reasonably well in the preseason under new head coach Doug Marrone, but Bills fans can hardly be comforted by the fact that, during his time at Washington State, Tuel was 4-22 as the starting QB.

This should be interesting, if nothing else. Good luck to Tuel and his Bills on September 8. It sounds like they’ll need it.