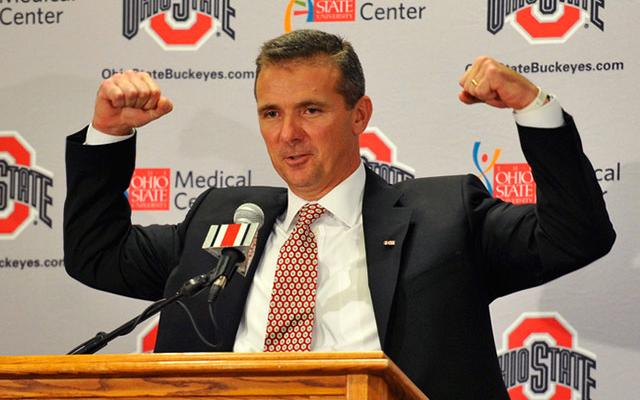 On last Sunday’s episode of SportsCenter’s “Sunday Conversation” on ESPN, Ohio State football coach Urban Meyer weighed in on the biggest problem in sports today. His answer: “There’s an issue in college athletics. Certain substance things I see. It’s non-stop. That’s an issue right now in college sports — marijuana. I see it, not just in college football. I see it everywhere. That’s an issue.”

Host Chris Fowler reminded Meyer that pot is legal in many states. But Meyer knew all. “I hear that debate all the time. ‘What’s the difference with a 17-year-old having a beer?’ But that’s illegal. Last I checked, we’re not in the business of making laws, we just have to abide by them and set the tempo.”

Funny you should mention the law, coach. At the University of Florida, 31 of your players were arrested during nearly six years as Gators’ coach. Some were charged with minor crimes like under – age drinking, disorderly conduct and violations of open-container laws. But more serious charges included aggravated stalking, domestic violence by strangulation, aggravated assault, burglary, larceny and fraudulent use of credit cards, according to criminal record databases. Most of cases never went to trial; charges were dropped or pleaded down.

So much for abiding by the law. It seems the real “biggest problem in sports” is the players themselves — and win-at-all-cost coaches.