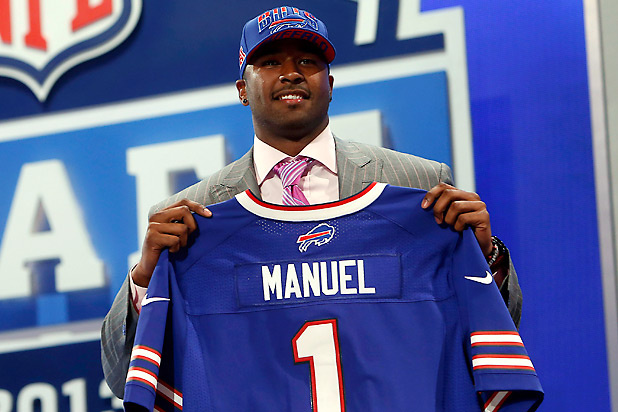 The signs were certainly encouraging when EJ Manuel

stepped onto the practice field for the first time this past Sunday. Now just over two weeks after undergoing minor knee surgery Manuel has been named the starting quarterback for Buffalo’s season opener against New England Sunday.

Head coach Doug Marrone made the announcement to the team at a 7:45 am meeting Wednesday. The athletic training staff and coaches put Manuel through a battery of tests over the past few days with the primary focus on his mobility. All parties wanted to be sure that Manuel was physically capable of escaping trouble in the pocket if and when it presented itself.The Bills top draft choice obviously passed with flying colors. All along Manuel has put in extra work in an effort to accelerate his recovery from a knee injury in the team’s second preseason game and subsequent surgery. Those efforts have apparently paid off.
“Each day my injury has gotten better, and I’ve been doing two or three treatments a day,” said Manuel. “That’s helped me a lot.”
At the same time Manuel is not surprised that his recovery ran ahead of schedule, as the original target date to begin practicing again was today.
“I’m not really surprised,” he said. “I try to work hard at everything. I can control whatever I can control, and I can control trying to get my knee better, and that’s what I’ve done.”
The Bills top draft choice said once cleared and given the green light to play he would not think about his injury at all when he’s out on the field Sunday.
“When you play, and if you’re going to play, you can’t think about any injuries that you have, whether it’s something you had a procedure on, or a sprained finger or something like that,” he said. “You’ve just got to go out there and play.” via
Bills