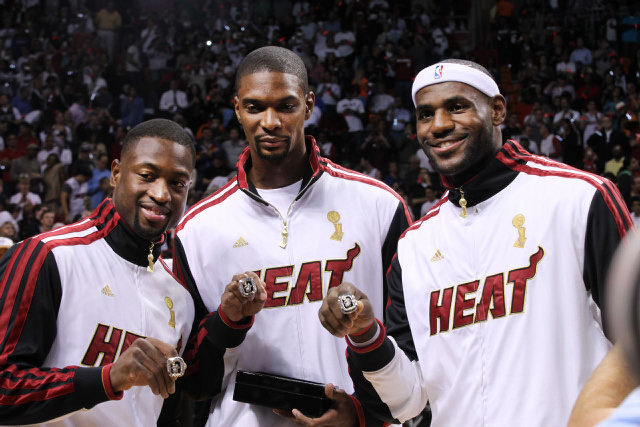 MIAMI (AP) — Dwyane Wade couldn’t wait to be awarded his third NBA championship ring. So he decided to sneak a pregame peek at his newest piece of jewelry.

And yes, he approved.

“I think they get better every year,” Wade said.

By now, he would be an expert in that field.

he Heat got their rings Tuesday night, shortly before beginning their quest for a third consecutive championship by opening the season against the Eastern Conference rival Chicago Bulls.

The way Wade sees it, the rings are enormous out of necessity.

For Heat President Pat Riley, it was his ninth championship ring – as a player, coach and executive. Wade and Udonis Haslem are the only players to be on all three Heat title teams, and the biggest cheers from the sold-out crowd seemed to be reserved for LeBron James, who picked up his second piece of title-commemorative jewelry.

James exchanged some words with Commissioner David Stern after being given his ring, then shook or slapped hands with dozens of Heat players, coaches and staff before turning his gaze skyward and watching the championship banner get hoisted to the rafters – albeit a temporary spot before it gets moved to its permanent home on the other side of the court in the coming days.

“To be able to relive last year one more time with our fans and our family, man, it’s going to be a great moment,” James said before the ceremony. “And then to begin another journey, that’s what this league is all about. You forget about last year and you move on to the next one.”

The ceremony included the court being used as a 3D projection screen for a video looking back at some of last season’s highlights, including the wild, late comeback in Game 6 of the title series and then the ultimate game against San Antonio. And Stern – who was presiding over his last ring night before ending his tenure as commissioner early next year – lauded both Miami’s fans and its team for their success.

“Your Miami Heat had some season last year,” Stern said as the crowd roared. “A franchise-record 66 wins, 27 straight wins and a captivating, captivating finals that showed the world of basketball what determination, talent and teamwork can do. So congratulations to those players on your NBA champion Miami Heat.”

Players were brought out individually – everyone did some sort of salute, with Shane Battier and Chris Bosh blowing kisses to their families and Haslem raising his arm in appreciation of the crowd – to get their rings. The Bulls elected to stay in their locker room for the ceremony.

“This is the final culmination of last season,” Heat coach Erik Spoelstra said. “We’ve already started to put it behind us. This will be the final step for us fully putting it behind us.”

Shortly after the banner was raised and streamers rained down, warmups began – and then, at last, the season.

“Somebody’s going to be crowned another champion next year,” James said. “Let’s see who it’s going to be.” via NBA