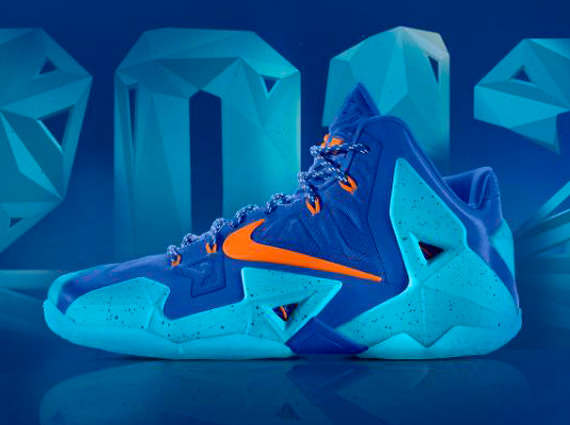 Super dope colorway on these Lebron 11s! How do you feel about these? Would you cop if they were a general or limited release? Let us know in the comment box.

If 2011 was all about LeBron’s decision to go to Miami, then 2012 was his redemption year. Vilified for his teaming up with Dwyane Wade and Chris Bosh then losing the the Mavericks in 6 games, the Heat returned with a vengeance with LeBron at the helm. He earned MVP honors, but his work wasn’t done until he defeated the Oklahoma City Thunder in 5 games to hoist the Larry O’Brien Trophy. In honor of his first title, NIKEiD designed the LeBron 11 in an OKC-esque scheme outfitted in shades of Game Royal and Gamma Blue while the Swoosh and dynamic flywire get an orange treatment. Continue onward to get a better look at NIKEiD’s latest custom and let us know what you think of this latest design in the comments. via SN