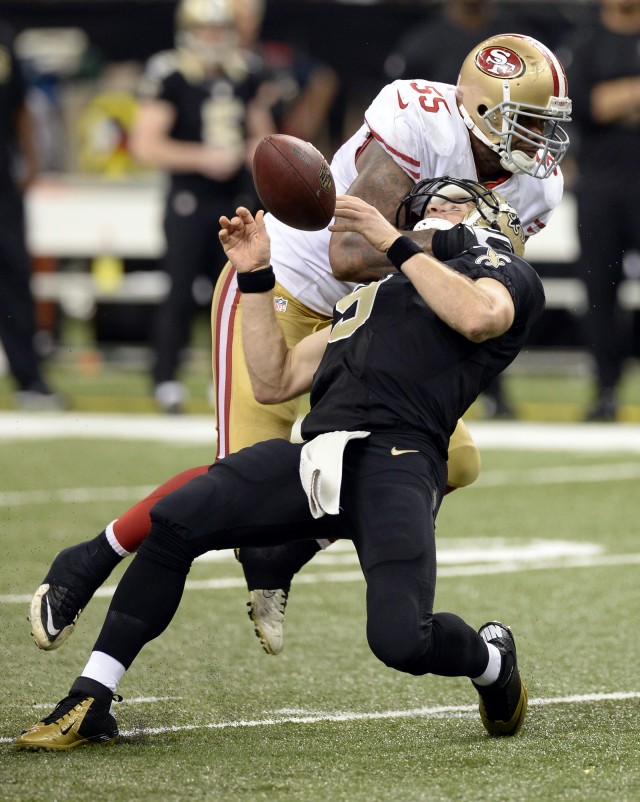 One of the big turning points in Sunday’s game came when 49ers outside linebackerAhmad Brooks sacked Saints QB Drew Brees and was called for a personal foul. The officials believed Brooks hit Drew Brees in the “head/neck” area. It turned what should have been a 3rd and 12 at the 49ers 45 into a 1st and 10 at the 49ers 30.

I said in the initial recap that the 49ers had plenty to blame in their own execution and play-calling, and I stand by that. This team had opportunities to put this away and could not get it done. That being said, I don’t think there is anything wrong with complaining about the shoddy performance of Tony Corrente’s crew of officials.

As we can see on this replay, Brooks arms wrapped around Brees’ chest to take him down. Then as he was bringing him down, Brooks bicep ended up touching Brees neck as it jerked forward.

On this slow-motion replay it looks to me like a legal hit. I know plenty will disagree and have disagreed, but this strikes me as a football play. It’s not like a clear-cut clothesline at the neck or a blow to the head. This does not seem to me to be the kind of play these rules have been created to protect against.

And yet, at this point it’s neither here nor there. There were other bad calls against the 49ers, but they also benefited when the refs probably should have ruled Corey White down by contact on that interception. But the 49ers came up short for a variety of reasons. The refs were one of the reasons, but the refs were not the only reason. Of course, that doesn’t mean we still can’t complain about the officiating. Overall, it was pretty horrendous in this game. via Niners Nation