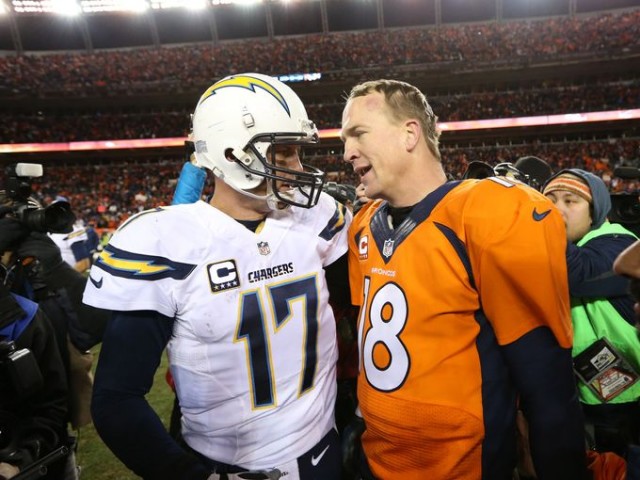 Peyton Manning had just finished dispatching Philip Rivers and the San Diego Chargers 24-17 when he was asked if a report regarding his future was weighing on his mind.“It’s really not,” Manning said, per the Boston Globe. “What’s weighing on my mind is how soon I can get a Bud Light in my mouth. That’s priority number one.”

Manning completed the best regular season of any quarterback in NFL history and is fighting to win his second Super Bowl ring. So, of course an ESPN reportthat an offseason neck scan will dictate his NFL future isn’t of concern to him at the moment.

“I’ve really been, this team has been, a one-week-at-a-time season,” Manning said, per USA Today. “For all we’ve been through, losing our coach and losing different guys to injuries, that approach has served us well. I think we need to keep that approach from here on out.”

Manning is keenly aware that his opportunities to hoist the Lombardi Trophy are dwindling. He said as much last week with his “light at the end of the tunnel” quote. However, he’s not going to worry about what might take place in the offseason.

This week will be all about beating Tom Brady and the New England Patriots for a right to play in another Super Bowl.Manning has all week to talk about the Patriots and all offseason to worry about medical issues. After the win, he just wanted a beer.via NFL