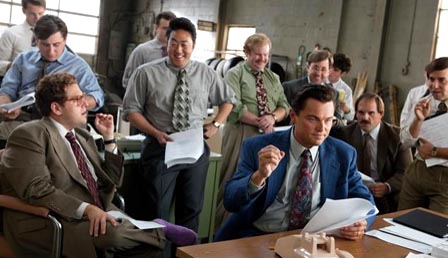 Both the book and the movie “The Wolf of Wall Street” contain many crazy, entertaining, and decadent stories. But beneath all the debauchery there are a number of key lessons for you to learn from the success of Jordan Belfort and Stratton Oakmont.

Read on for some great insight into this motivated business man that will show you howJordan Belfort was able to build a super pumped organization before it all came tumbling down.

Stratton Oakmont’s initial success was based on two premises:

• That Belfort had come up with a way of teaching young, uneducated people how to sound like professional stock brokers over the phone.

• That rich people love to gamble – especially when the gamble seems like a legitimate business opportunity.
While there had been other people on Wall Street who’d had the same idea, Jordan Belfort was the first person to execute on this idea.

The reason Belfort was able to transform young, uneducated people into charismatic stock brokers was because he was able to impart his knowledge by giving simple instructions in a way that even the most stupid employees could easily understand.

“And as word of this little secret began to spread throughout Long Island—that there was this wild office, in Lake Success, where all you had to do was show up, follow orders, swear your undying loyalty to the owner, and he would make you rich—young kids started showing up at the boardroom unannounced.” – Jordan Belfort

3. Put Together a Loyal Team

Guys like Kenny Greene and Danny Porush weren’t the smartest guys around. But, they were long-term friends who were fiercely loyal to Jordan Belfort.

What does this mean?

That it might be a good idea to work with old friends who knew, and liked you, before you got rich and successful. By doing this you will reduce the risk of:

• Becoming betrayed or back stabbed by two-faced people.

• Making stupid decisions because you’re surrounded by yes-men who don’t give you accurate feedback.

The post We Can All Learn From “The Wolf of Wall Street” appeared first on 8&9 Clothing Co..