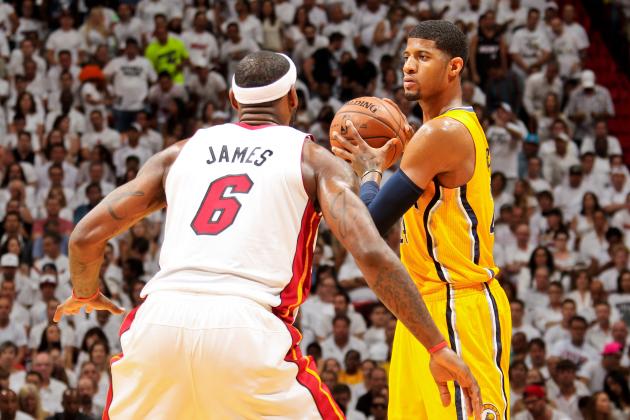 LeBron James’ ears must be on fire. Before being handed a 119-80 beatdown by the Indiana Pacers, Denver Nuggets head coach Brian Shaw praised Paul George at the expense of James, according to The Denver Post’s Chris Dempsey: In case you thought Shaw was accidentally speaking in hyperbole, he added the “Hands down” and “That includes LeBron” segments, so it’s clear he really believes it.

It’s also important to realize he’s not necessarily saying George is the better player. If all two-way players were considered the best of the best, career scorers such as Carmelo Anthony would never make it into the superstar conversation. But is Shaw right? LeBron is often considered untouchable because, well, he’s LeBron. Statistically speaking, though, George is nipping at his heels.

On offense, I’m not sure why anyone would take George over James. The Miami Heat superstar is a unique combination of efficiency and potency, able to score from anywhere on the floor while shouldering primary playmaking responsibilities. George, while a more deadly three-point shooter this season, is neither as productive nor as versatile on that end of the floor. Though he can score and create opportunities for his teammates, he doesn’t do either of those things as well as James.

Defense is a different story. Andy Lyons/Getty Images There’s a strong case to be made that George is the more effective defender right now, with his defensive rating a full 10 points better than James’, per Basketball Reference. Some would even argue that James is struggling on that end. Everyone except James himself, that is. “That’s why I should be Defensive Player of the Year,” he said of his ability to guard every position, per ESPN’s Brian Windhorst. “No one has ever done this before.”  James is a one-of-a-kind defender. Few players, if any, have ever boasted his explosion and dexterity, his size and quickness, and he uses everything he has to defend everyone. Can George do that? Is he actually the NBA’s best two-way player, or is Shaw being overly kind to a star he helped coach while with Indiana?

George is talented, but let’s not act like he has James beat on either end of the floor. Down the line, maybe things change. Maybe George is universally recognized as the league’s best two-way player. Or maybe that’s Anthony Davis’ honor to chase. Right now, nothing has changed. Not yet. James has been dominating both sides for much longer and must be given the benefit of the doubt in this conversation. Hands down.