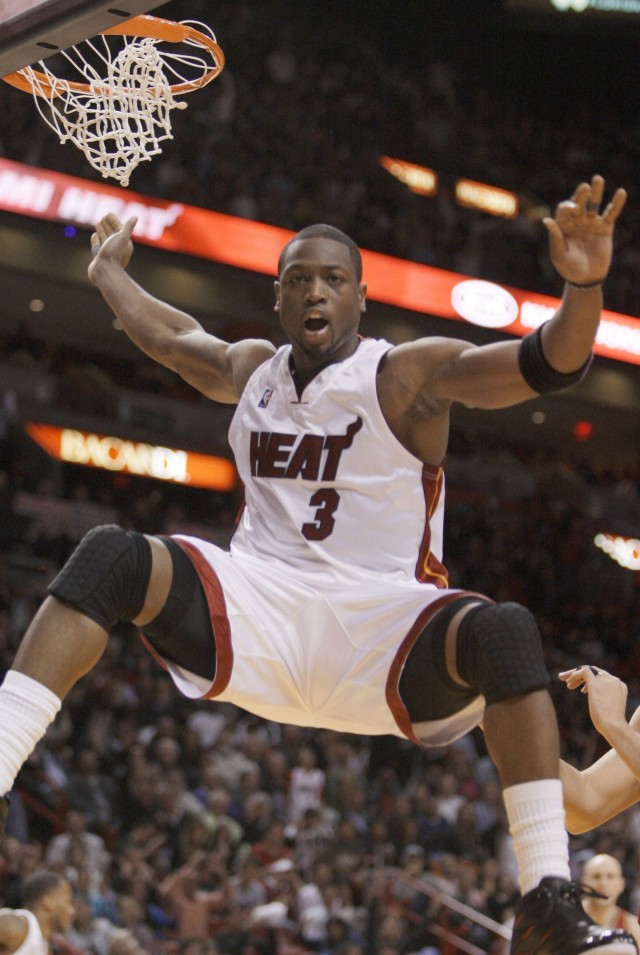 Sometimes, Dwyane Wade is back to being the best player on the Miami Heat.

In the biggest game of the Heat’s season to date, Wade picked up the slack for his two struggling co-stars, leading the Heat to an 87-83 victory in Game 2 of the Eastern Conference finals, tying the series at one game apiece as it heads to Miami after a three-day layoff.

This was a high-leverage game. There’s a huge difference between a 2-0 Indiana lead and Miami taking away home-court advantage.

But LeBron James did not look to take over offensively as we’ve come to expect when his team is desperate for a win. And he didn’t improve on his poor defensive performance in Game 1 either, looking slow and disinterested on that end of the floor for most of the night.

A lineup change — starting Udonis Haslem instead of Shane Battier — didn’t really work. Haslem was a minus-20 in less than 19 minutes and Roy Hibbert destroyed the Heat on the offensive glass.

But the Pacers came back to earth offensively, shooting 5-for-22 from outside the paint in the first half. And Wade’s postseason revival continued.

Wade scored 13 of the Heat’s 41 points in the first half, more than twice as many as any of his teammates. He scored five of those 13 as the Heat took the lead with James on the bench early in the second quarter.

He was stuck on that 13 until the fourth, when he and James took the game over and put the Pacers away. Going back to the last three minutes of the third, James and Wade scored or assisted on Miami’s final 33 points of the game. After a sluggish first 33 minutes, the Heat scored those 33 points on just 24 possessions, turning a six-point deficit into a four-point win.

“Tonight was one of those nights,” James said, “where we were making plays, finding guys, and finding each other, finding a good rhythm with the ball in our hands.”

Wade shot 5-for-5 in the fourth, finishing off the Pacers with a personal 8-3 run in the final minutes. James woke up from his slumber just in time, but his co-star helped him, on both ends of the floor, get to those closing moments.

Not only did Wade carry the offense early, but he defended Paul George for most of the fourth quarter, with the Pacers’ star attempting only one shot (a contested, pull-up 3 late in the shot clock) and two free throws in the final 11 minutes. Once again, the Heat turned up the defense once they absolutely needed to, and it was Wade who took on the toughest assignment.

“He understands that as well as anybody that you can impact a win on both sides of the court,” Heat coachErik Spoelstra said of Wade. “So that wasn’t only creating the offense for us on the other end, it’s taking a challenge on one of the best scorers in the league. And just trying to be there. That is all you can do. It’s trying to be there in front of him so he doesn’t get open looks and free throws at the rim.”

Wade doesn’t have the explosion he used to. He still, amazingly, does not have 3-point range. But he’s crafty. He finds ways to get the space he needs to get off a shot, and he has a remarkably soft touch.

Most importantly, Wade is fresh and strong at the right time. He played just 54 games this season in order to leave some gas in the tank and some lift in his legs for the playoffs. And the rest is paying off.

Wade has shot 50 percent or better in each of his last five games. And he has averaged 26.0 points on 32-for-52 (62 percent) shooting in his last three. He played his best game in a long time in Game 5 against Brooklyn, and that performance has carried over into the conference finals.

Though the Heat are now 9-2 in the postseason, their last four wins have come down to fourth-quarter execution. They haven’t been as dominant as they’ve been in the past and their defense has been inconsistent, to put it nicely.

But it could be that they’ve yet to play their best basketball, because Wade is looking stronger every time he takes the floor. And on nights when James doesn’t look like the best player in the world, it helps that he has a pretty good wingman with plenty of experience in being option No. 1.