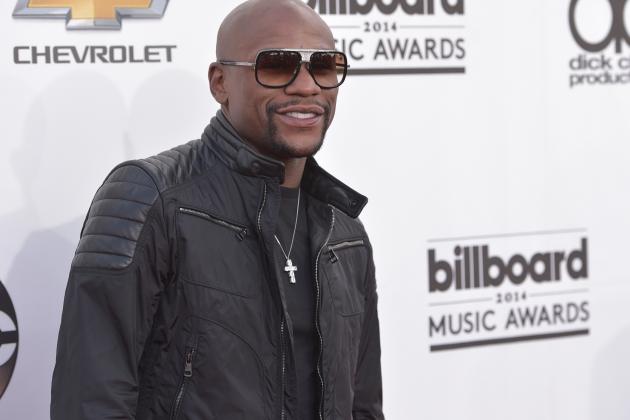 Boxing icon Floyd Mayweather got into a physical altercation with hip-hop star T.I. on Sunday in Las Vegas, and now the veteran fighter has spoken on the matter in an exclusive interview.

Mayweather described what happened and what the genesis of the conflict was regarding T.I.’s wife, who is widely known by the name Tiny, per a report on NecoleBitchie.com:

[T.I] came to me when I was in New York. He stepped to me when I was at the jewelery store like, ‘Yo, let’s go outside and talk.’ We went outside to talk, but he talked about, basically, ‘These girls tryna play us against each other.’ I said, ‘I don’t know what you’re talking about. You’re talking about your wife?’ I never put up a picture of her on Instagram, Twitter or Facebook. I was basically like, ‘Listen. I’m letting you know I ain’t got…me and your wife don’t have nothing…if you think so.’

So Memorial Day weekend, a lot of people come out to Las Vegas. Tiny and Shekinah was out here. They come to my party last night. They cool. Everything is cool. We was at the strip club. Everything was cordial. We having fun. I throw my daughter [Iyanna] a big [14th] birthday bash today. I’m eating at Fatburger and next thing you know, he walk in talking about we need to talk again. And then I told him, ‘You need to get the f–k outta my face. That’s what you better do.’ And then he said, ‘I ain’t talking to all these people so you ain’t gotta talk loud.’ I said, ‘Listen, don’t come to my face with no disrespectful s–t. Like I told you before, you must’ve forgot what I did for a living.’ He said, ‘You do in the ring, I do it in the streets.’ I said, ‘My man, I do it everywhere. You can find out if you want to.’ Just like that.

Then a couple of words exchange and people got to pushing and a riot kinda broke out. And then a bunch of chaos and that was basically it. Because, like I said before, he probably does some foolish things, but he ain’t no damn fool to swing on me. Like, you must’ve forgot what I do for a living. He had a totally different look on his face.

For T.I. to take on one of the best pound-for-pound boxers in history, he was clearly not pleased with what had transpired. According to TMZ.com, T.I. was initially upset when Tiny posed for an Instagram photo with Mayweather’s daughter.

BallerAlert also captured a photo of Mayweather and Tiny, which is another factor in what led to T.I. confronting Mayweather:

Mayweather was not proud of the words he directed at Tiny immediately before the scuffle between him and T.I. occurred, and in the NecoleBitchie.com interview, he expressed remorse for that:

Only person I wanna apologize towards is Tiny. I said something like ‘control your b—h’ and I don’t want to say that about Tiny. So I do apologize to Tiny because she cool people, man. She cool. She never been disrespectful to me. Shekinah never been disrespectful to me. I’m going to continue to support Tiny and Shekinah cause they’re cool people and I don’t got nothing against them. So I apologize for that.

The fact that Mayweather didn’t apologize to T.I. suggests that this sparring through the media could continue. Hopefully both sides can make amends and move on from what was an unbecoming episode for all parties involved.

Who Mayweather fights next will likely become the focus now that he’s addressed this issue and is evidently seeking to move forward. Although he’s set his date for September 13, no opponent has been determined. While fans will still clamor for a showdown with Manny Pacquiao, it doesn’t seem likely given the history of bad blood between their camps.

Las Vegas is where Mayweather has made his name as a boxer, but this skirmish with T.I. does not reflect well. As is often the case, though, when Mayweather reenters the ring, fans will cast it aside. There is plenty of time between now and September for the blowback from the T.I. controversy to blow over, so Mayweather won’t have to deal with it much more now that he’s given his extended side of the story. via BR